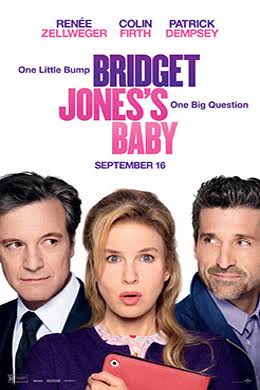 Bridget Jones (Renee Zellweger), the lovable main character from Bridget Jones's Diary is back! And she is turning 43. On her birthday her mother calls her to once again remind her that the time to find a husband and have a baby is running out. She later attends a funeral for her former boyfriend Hugh Grant. There she sees Mark Darcy (Colin Firth), who is also her ex-boyfriend. He introduces her to his wife. Bridget and her friend Miranda attend a music festival the next day. It is there that she meets Jack Qwant (Patrick Dempsey). She and Jack start to flirt and they end up in bed together. Bridget wakes up the next morning alone. Bridget and Mark see each other again and end up sleeping together after Mark reveals he is getting a divorce. He wants to start a relationship, but she ends up telling him it won't work and leaving. A few weeks later, Bridget discovers that she's pregnant. She also has no clue which man is the father.

Bridget and Jack meet again and she tells him about the pregnancy, but doesn't mention Mark. She manages to get some of his hair for a DNA test. Bridget meets with Mark and tells him that she has a baby on the way, but doesn't mention Jack. Both men think they are the father. Once Bridget reveals to both of them the unknown paternity of her child, they start to be in competition for her love. They both want to help her in any way possible. However, Jack convinces Mark that the baby is most likely his, causing Mark to exit Bridget's life. Bridget is skeptical about furthuring her relationship with Jack in case the baby turns out to be Mark's. When she finds out that Jack was the cause of Mark leaving, she goes to his house to reconcile with him. She decides against it when she sees his ex wife there with him.

In her ninth month of pregnancy, Bridget is fired from her job. Mark finds her and is comforting her, revealing that his ex wife was only at his house to get some items she had left behind. They are about to kiss and Bridget's water breaks. Jack shows up and the three of them help Bridget to the hospital. The baby is a boy and right after it's born Jack and Mark do a DNA test.

A year later, Bridget is shown getting married to Mark. The baby boy, William is Mark's child and Bridget now feels more fufilled with her life than ever.

Bridget Jones's Baby was actually a very good movie. I went into the theater expecting a cheesy movie about who some lady's baby daddy was. I found out that the movie really explores a woman who feels like her life isn't fulfilled and is presented with an oppurtunity to do so. It was also very funny and there were some great romantic scenes. I think this is a great sequel to Bridget Jones's Diary and does it and all of the characters justice. I overall liked this movie and even though it isn't award winning, it was still a pleasure to watch.